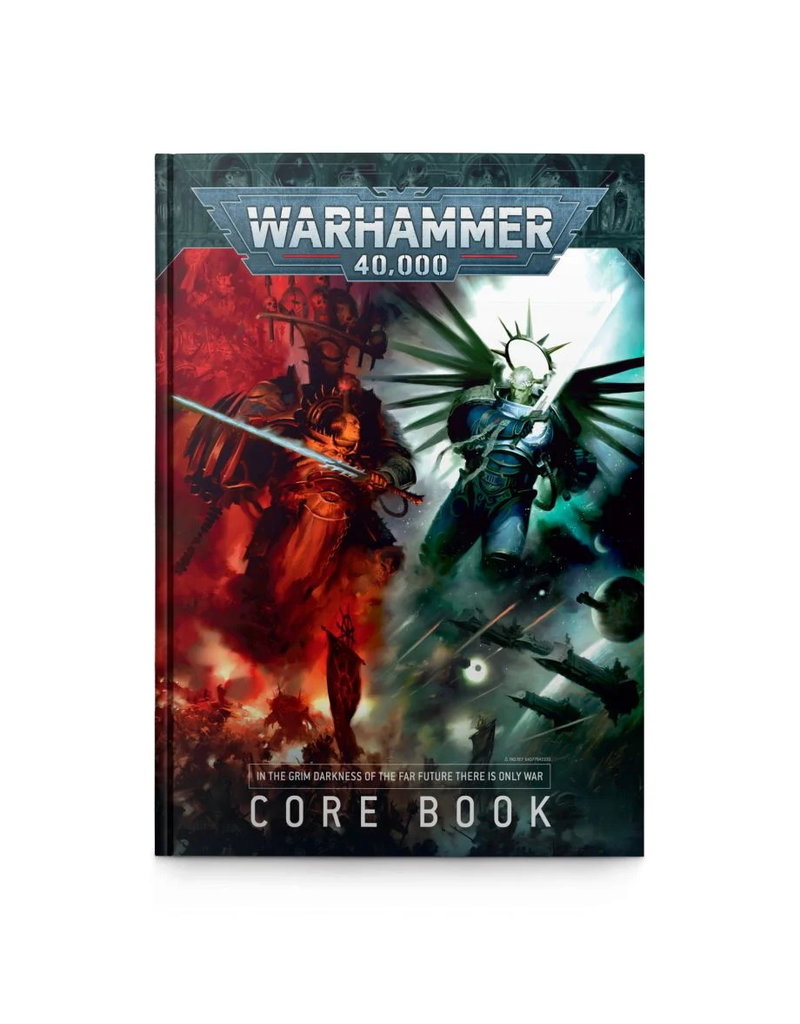 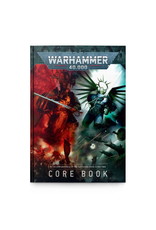 There is no time for peace. No forgiveness. No respite. There is only war.

The galaxy writhes in the mailed fist of all-consuming conflict. The Imperium of Mankind teeters on the brink of annihilation, beset upon all sides by heretic warlords, daemon-summoning witches and rapacious alien empires. In every star system and upon every planet, fierce battle rages as loyalists, heretics and aliens tear reality itself apart in their war for dominance. Every day the flames rise higher.

This is a more terrible era than ever before, and there is no peace amongst the stars...

The Book
A 368-page hardback, this is the essential book for any fan of Warhammer 40,000 – everything you need to know to collect, build, paint and play with Citadel miniatures.

It starts with an overview of the Warhammer 40,000 hobby, covering the four areas of Collect, Built, Paint and Play, including descriptions of open, matched, and narrative play.

Dark Imperium
In the first of the book’s huge lore sections, you can read all about the state of the galaxy after the Cicatrix Maledictum – the Great Rift – tore open across the galaxy, dividing the Imperium in two. Humanity faces its greatest challenge in more than ten millennia as the forces of Chaos run rampant across the reeling Imperium even as alien warlords seek to take advantage of the untold devastation wrought upon the Emperor’s realm.

A gatefold also includes an ornate depiction of the planets and the Sol System, as well as a map of the entire galaxy, calling out key war zones so you can see where the action hot spots are currently situated. Dark Imperium continues by covering in brief the Imperium's military wings, its bureaucratic institutions and even its other, more clandestine organizations…

As you read on, you'll learn more about the constant flux of the Imperium's borders and gain insight into the Imperial Creed's attitude towards abhumans, psykers and, worst of all, mutants and heretics!

Lastly, Dark Imperium provides a brief overview of the four Dark Gods of Chaos – including their immortal daemonic legions, sycophantic followers and dread mortal champions – as an ever-present threat to the Imperium.

The Saga Imperialis
Upon delving into the next part of the lore, you'll enjoy a high-level overview of the history of Mankind, from its very beginnings, through the early Ages of Terra and Technology, the Ages of Strife and Darkness, all the way up to the Age of the Imperium in the aftermath of the Horus Heresy. It continues to reveal the events of the Age of the Dark Imperium and the Gathering Storm in the time before the Great Rift tore open – and the Age of Witches that followed during the Psychic Awakening. Finally, it lays the foundations of the Indomitus Crusade, following the reborn Primarch Roboute Guilliman's visitation with his father, the Emperor, on Holy Terra.

As you continue, you’ll glean insights into the Imperium's stance against the Alien – covering the Orks, the T'au Empire, the Aeldari, the Necrons and the extragalactic Tyranids – the Daemon and the Heretic.

Bringing this section to a close are four short pieces of fiction, which bring the grim reality of the Era Indomitus to life in incredible detail.

The Warriors of the Emperor, The Lost and The Damned and Xenos Invaders
These sections cover every faction in Warhammer 40,000 and will offer you an in-depth understanding of each one, the threat they pose and their place in the galaxy. There is also a stunning miniatures showcase for each faction, depicting them as they would appear in battle and with narrative descriptions.

The Rules
The first section of the core rules covers the basic rules of the game, and takes you through the rules that apply to the seven phases of the game: the Command phase, Movement phase, Psychic phase, Shooting phase, Charge phase, Combat phase and Morale phase.

- Playing missions and the process of building an army in readiness, using either Power Rating or points values
- Battle-forged and Unbound armies, as well Command points that Battle-forged Armies can utilize
- Battlefield Roles and 11 types of Detachment that can be included in your armies
- Seven Core Stratagems that are universal and available to every army in Warhammer 40,000
- Strategic Reserves – the option to hold back units during deployment and even send them to outflank the enemy line
- Actions – such as planting explosives, hacking into a databank, or performing a ritual – and how they can be performed (and in some cases, prevented)
- Rules for terrain features, such as Hills, Obstacles, Area Terrain and Buildings, including traits the terrain might have and its impact on the battlefield
- Hints and tips for setting up a suitable battlefield, in terms of density and type of terrain, type of terrain, and ensuring that neither side of the battlefield is preferential to the other

Open Play
Let your imagination run wild, as open play caters for reenacting every kind of narrative storyline or tactical challenge you can think of, without restrictions. This section centres around the Open Hostility Mission Pack – a 12-step guide to setting up and playing an open play game through to a conclusion and determining a victor. Includes the following:

- Guidance on mustering armies, determining missions, creating the battlefield and a host of other key points to playing a game
- Three bespoke open play missions

Matched Play
Designed to put both players on an equal footing, matched play offers both players an even chance of victory, leaving it to your own mastery of army selection and tactics to earn you the advantage in battle. This section features an Eternal War Mission Pack – a 16-step guide to setting up and playing a matched play game through to a conclusion and determining a victor. Includes the following:
- Guidance on selecting battle size, mustering armies, determining missions, creating the battlefield, selecting Secondary Objectives and a host of other key points to playing a game
- 18 bespoke matched play missions, each specifically designed around the size of the game being played: three for Combat Patrol, six for Incursion, six for Strike Force, three for Onslaught
- Secondary Objectives, featuring a list of 17 different Secondary Objectives that players can choose from, split over five separate categories

Narrative Play
Crusade is a new way to play games of Warhammer 40,000. It allows you to take a collection of miniatures and, taking them on a Crusade, level up your units over any number of games, against any number of opponents, forging your own narrative for your miniatures collection as they engage with their enemies on the battlefields of the 41st Millenium. Over your Crusade games, will you be able to grow your army, gain experience and skills, and modify your weaponry. Though you may start off with a small band of inexperienced warriors, you can create an elite fighting force that is renowned and feared across the galaxy!

- How to gather a Crusade force, and how it gains experience and levels up over its series of games
- A balancing mechanic to allow for any two Crusade forces, from the greenest band of soldiers to the most legendary squad of battle brothers to be able to play an evenly matched game of Warhammer 40,000
- Blank, photocopiable Crusade Cards and Order of Battle sheet for keeping track of your forces.
- Four tables of Battle Honours – Battle Traits, Weapon Enhancements, Psychic Fortitudes and Crusade Relics – each offering different in-game bonuses and effects that the unit has earned through numerous hard-fought battles
- A Battle Scars table for those units who fail to emerge from their battles unscathed…
- Guidance on setting up and playing a Crusade narrative play game through to a conclusion, determining a victor, and updating your Crusade Cards and Order of Battle
- A list of 17 different Agendas that players can choose from, split over five separate categories.
- 18 bespoke Crusade missions, each specifically designed around the size of the game being played: three for Combat Patrol, six for Incursion, six for Strike Force, three for Onslaught.

Rules Appendix
A handy reference section that includes the following:

- Designer's Commentary from rules designer Robin Cruddace
- An alphabetized list of 174 existing weapons that gain the benefit of the Blast special rule
- An alphabetized list of 22 existing miniatures/datasheets that gain the Aircraft keyword
- A summary synopsis of 14 rarer rules/interactions that don't often arise in games, but are important to keep a note of
- A Rules Terms Glossary, which provides precise and exacting definitions of 142 separate rules terms to aid in resolving more complex rules interactions