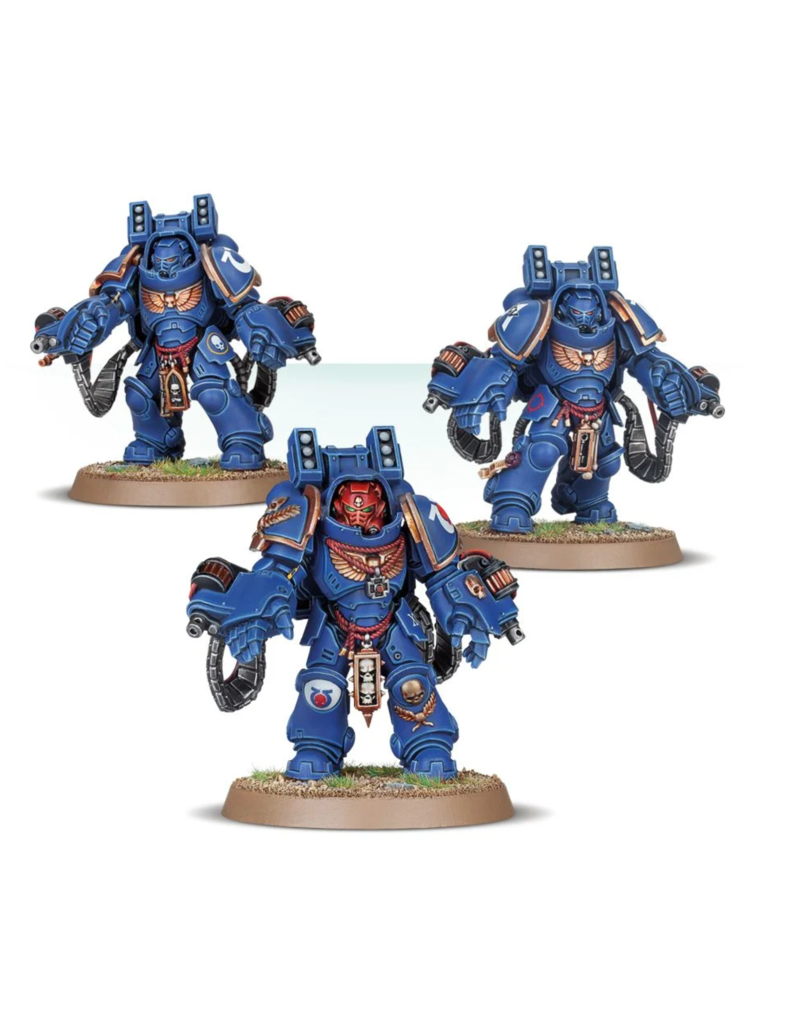 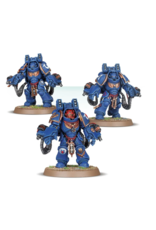 Clad in heavy Gravis armor, Aggressor Squads advance on the foe as walking fortresses of ceramite. More mobile than some other Space Marines, they’re better able to negotiate rough ground, making them versatile troops; while they are often employed in specific circumstances or on certain terrain, Aggressor Squads are used as reserves to plug breaches in gun lines or to spearhead an advance. The range of their weaponry is not too long, but when they get close enough to open fire, the result is a sweeping fusillade of large-caliber bolter shells that can shatter enemy charges.

This multi-part plastic kit contains the components necessary to assemble a 3-man Primaris Aggressor Squad. Extremely heavily armored, their silhouette is wider and chunkier than most Primaris Space Marines, due in no small part to the choice of auto boltstorm gauntlets or flamestorm gauntlets. There are three sets of each, with every weapon featuring pipes or belts that are fed from the enormous backpack. One set of flamestorm gauntlets features retracted barrels, as in close combat fists speak louder than flames… Should you choose the boltstorm gauntlets, the Aggressors can also take a fragstorm grenade launcher.

You have the option of assembling 3 Aggressors or 2 Aggressors and a Sergeant; a host of options are available either way. There are 6 heads for the standard Aggressors, with respirators on the mask of those using flamestorm gauntlets, and 2 more specific heads for the Sergeant. The flamestorm-wielding Aggressors have their own shoulder pads, featuring larger blast shielding to protect them from the immense operating temperatures of their weapons. Also included are reliquaries and purity seals, with special examples for Sergeants featuring extra skulls.

The Primaris Aggressors come as 107 components, and are supplied with 3 Citadel 40mm Round bases.